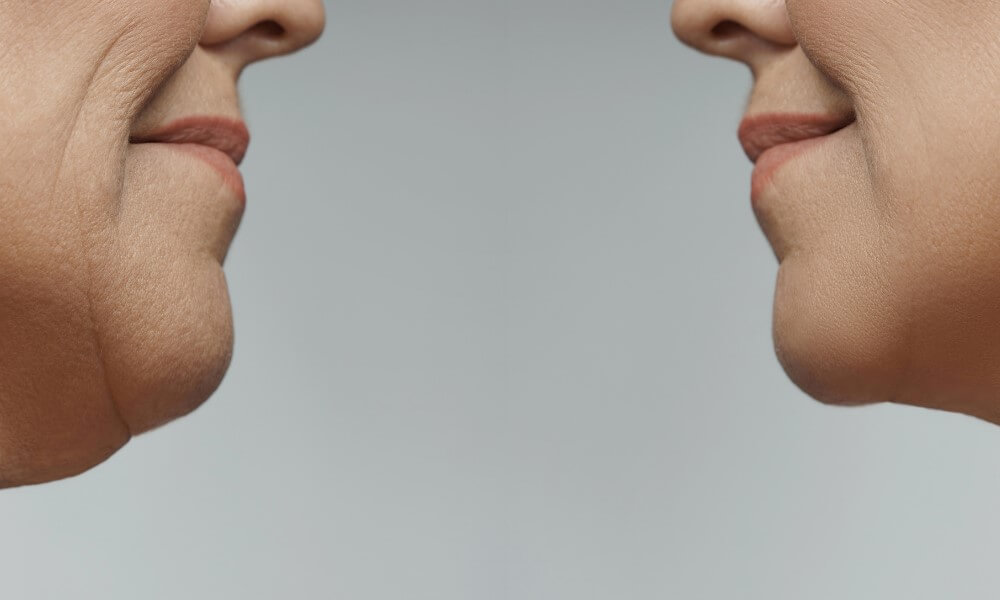 A facelift paired with a neck lift or liposuction is a common procedure for double chin removal.

While many of us want to see a more streamlined profile when we look in the mirror, some of us have extra fat that causes a double chin. A double chin can be caused by a number of variables, including heredity, weight, anatomy, and airway location.

If you’re unhappy and annoyed with that double chin of yours, you’re not alone. In fact, up to 68 percent of people suffer from excess fat cells under their chins.

So how do you get rid of a double chin? Can it be removed in the first place? If yes, how much does it cost?

In this article, I will talk about double chin removal and how much it usually costs. I will also show you before and after photos of my patients who went through double chin treatments.

How Do I Get Rid of the Fat Under My Chin? 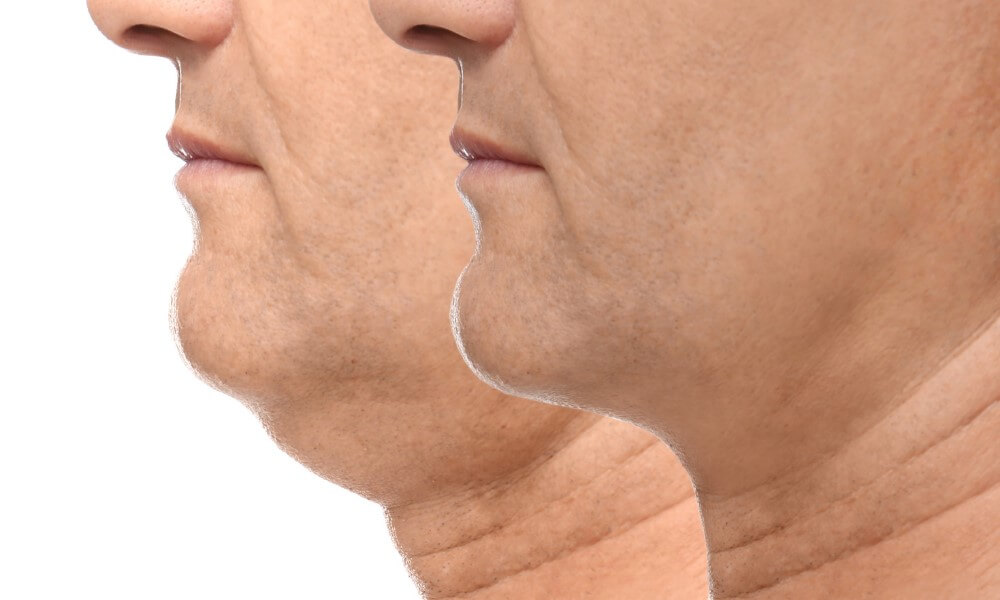 You can choose from many treatments to get rid of the fat under your chin.

To get rid of your double chin, you need to go through a certain procedure. Now, the exact procedure depends on your needs and goals.

For this reason, it’s crucial that you consult a plastic surgeon first. Together, you can decide which treatment will suit you the best.

In general, treatments such as facelifts, neck lifts, and liposuction can get rid of the fat under your chin.

Can a Double Chin Be Removed? 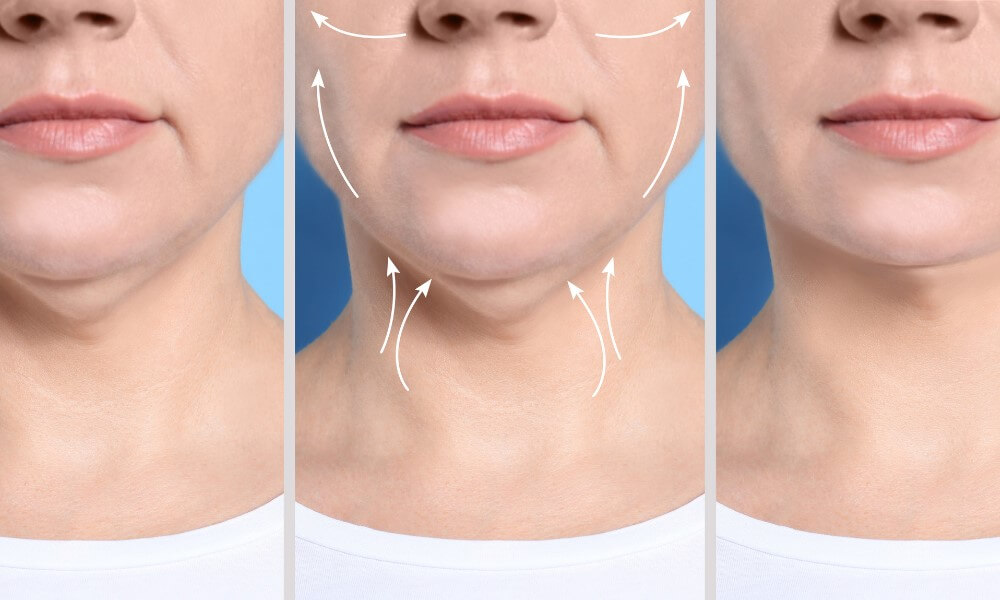 In addition, the only real solution to a double chin problem is decreasing your fat content through double chin surgery. This is where treatments like facelift, neck lift, and liposuction come in. 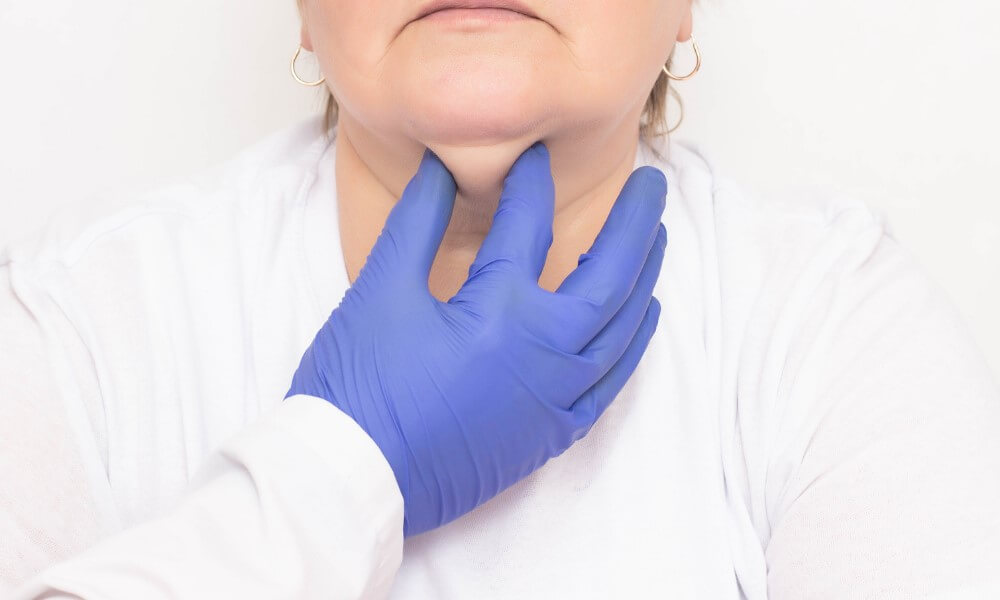 You can choose from double chin surgery or chin liposuction that removes excess fat cells.

Depending on your needs and goals, I may use one or a combination of the following procedures:

Moreover, the procedure eliminates drooping skin for a more youthful appearance. Depending on where the signs of age have appeared, different facelift methods are available. The upper face, mid-face, or lower half of the face, including the neck and chin, can all be treated.

In addition, this procedure is often done with a neck lift to get rid of saggy skin and improve skin laxity in the neck area.

Get a Neck Lift

A neck lift offers the same advantages as a facelift. However, it concentrates on loose skin behind the chin and along the neckline. It can also be done with liposuction to further tighten neck skin, address tiny fat pockets under the chin, and remove excess skin.

The good news is that a neck lift cosmetic surgery can smooth and refine the neck skin and chin region without causing drastic alterations to your face. As a result, you will enjoy natural and subtle results.

Submental liposuction is a surgical procedure that removes fat cells for patients who want a one-time treatment. A local anaesthetic or an injectable numbing medication can be used for this liposuction.

After the skin has been numbed, a tiny incision is made beneath the chin in a hidden skin fold. Through a small incision, the skin is separated from the fat, and the excess fat is suctioned away.

CoolSculpting or fat freezing for the chin is a non-invasive fat reduction treatment that doesn’t require any anaesthetic, needles, or incisions. It operates on the idea of fat freezing.

In particular, fat freezing works by chilling subcutaneous fat to the point where the fat cells are destroyed and absorbed by the body. The fat layer right under your skin is known as subcutaneous fat.

Fat freezing is meant to be used as a treatment for people who have already attained their optimum weight. You must take note that fat freezing is not a means of losing weight. Fat freezing is also not an alternative to living a healthy lifestyle.

Before and After Photos

Are you wondering what a double chin removal looks like? Here are before and after photos of my patients: 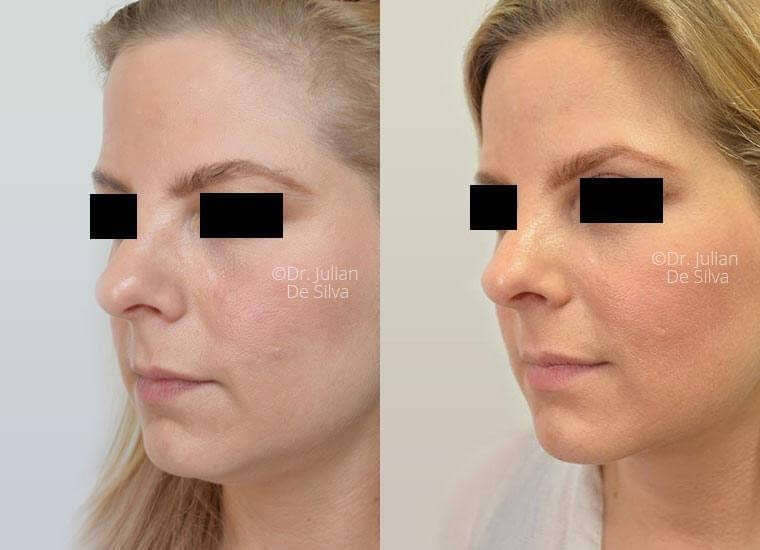 This 40-year-old lady observed sagginess in her neck. She was also bothered by the lack of natural curves and contours. She came in for a consultation with me, Dr. De Silva, to evaluate neck lifting alternatives. However, she was not interested in invasive surgery with a lengthy recovery period.
On examination, the skin around her jaw had begun to droop over time, with some fat deposit weakening her neck skin and jawline. This left her jaw looking uneven, which was exacerbated by her relatively tiny chin. I, Dr. De Silva, examined her neck. Then, we talked about the best way to rejuvenate her appearance with the least amount of downtime.
As you can see, her double chin was removed after neck lift procedures. She couldn’t be happier with the results. 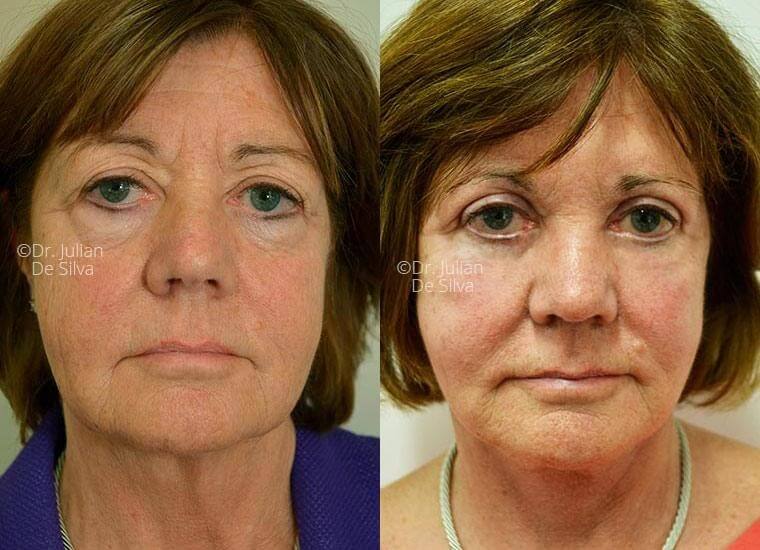 This doctor in her fifties had observed that she was looking fatigued. She also had a drooping turkey neck and various creases and lines on her skin. A coworker sent her to me, Dr. De Silva, to explore face and neck lifting alternatives.
On examination, the skin around her jaw had begun to droop with time. Plus, with some fat buildup, her jawline became weak and appeared uneven.
I, Dr. Julian De Silva, examined her neck and talked with her about the best way to fix it with the least amount of downtime. To restore a more youthful jaw and neck angle, she had micro-cannula neck and chin liposuction. Her neck and jaw angle were also contoured.
As you can see, her double chin and turkey neck were gone. She also looked more alive and youthful. 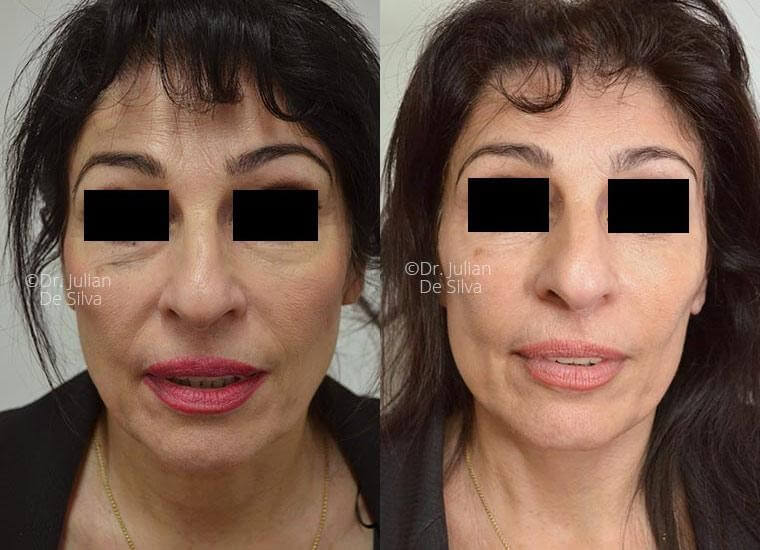 This 55-year-old woman was dissatisfied with the drooping soft tissues beneath her jaw and droopy neck muscles. There were noticeable soft tissues and slack skin around her jaw, giving her jaw an uneven appearance and deep nasolabial lines.
She had facelift and neck lift surgery. I used my deep plane facelift technique, which incorporates triple-layered skin closure in the treatment area. This eliminates obvious scarring and assures optimum results.
As you can see, her double chin was reduced and her neck became smoother. 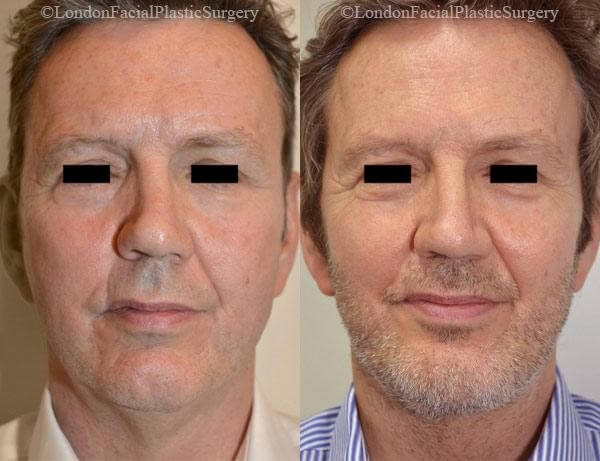 This patient’s mother had noted an increase in his fatigued look, including a sagging neck and various creases and lines in his skin. He had previously undergone a face and neck lift treatment and came to me, Dr. De Silva, a plastic surgery and chin liposuction specialist, to discuss additional alternatives.
On examination, he had a tiny chin with loose skin along his jaw that had begun to sag over time, as well as some fat buildup and weakening of his jawline. He had to undergo cosmetic surgery. Particularly, he had more than one treatment namely a neck lift and liposuction.
As you can see, his neck area became smoother and his double chin was removed.

For many years, this lady in her 30s was unhappy with her neck and jawline. She wanted to improve her looks, so she started seeking a qualified facelift surgeon to assist her.
I, Dr. De Silva, performed a neck lift and chin augmentation using my neck contouring guide, which resulted in a significant improvement in her neck, chin, and jawline.
As you can see, the fat under her chin was gone. Her sagging skin improved as well. 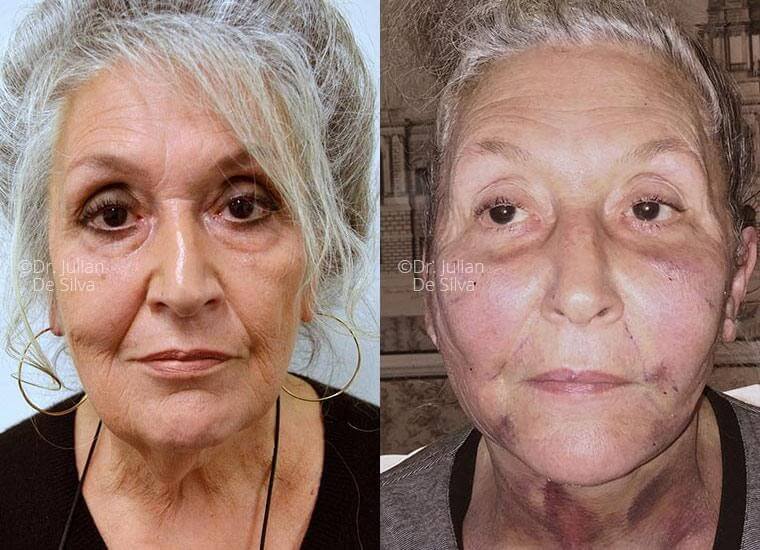 For almost ten years, this woman had been unhappy with the look and overall sagginess of her neck. Despite being offered non-surgical options, none of them had made a significant change in her neck.
She came in for a consultation with me to evaluate neck lifting alternatives. On examination, the skin and fatty tissue around her jaw had begun to droop significantly over time, with loose skin and considerable fat deposits.

The patient had various surgical procedures. She had face and neck lift cosmetic treatments with fat transfer. I also used biotechnology to speed up her recovery. As you can see, her double chin was gone. Her chin and neck significantly improved as well. 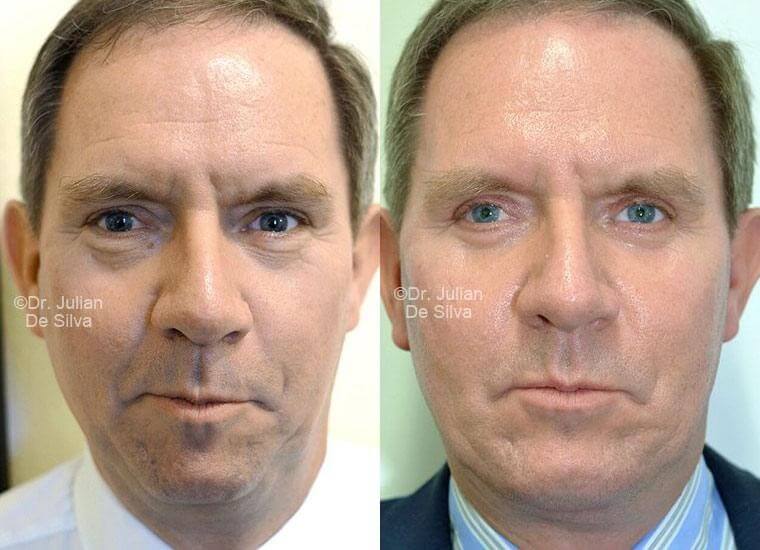 This man in his fifties wanted to improve his looks, specifically his eyelids, drooping jowls, chin, and neck. With time, the skin around his jaw had begun to droop, giving him an uneven jaw and a web of surplus skin behind his chin and neck.

He requested a meeting with me, Dr. De Silva, knowing that an expert London facial cosmetic surgeon could advise him on the best surgery for facial skin sagging.

This patient had a facelift and neck lift. As you can see, his double chin and the surrounding tissues were greatly reduced. His neck also became smoother, making him look younger and refreshed.

How Much Does Double Chin Surgery Cost? 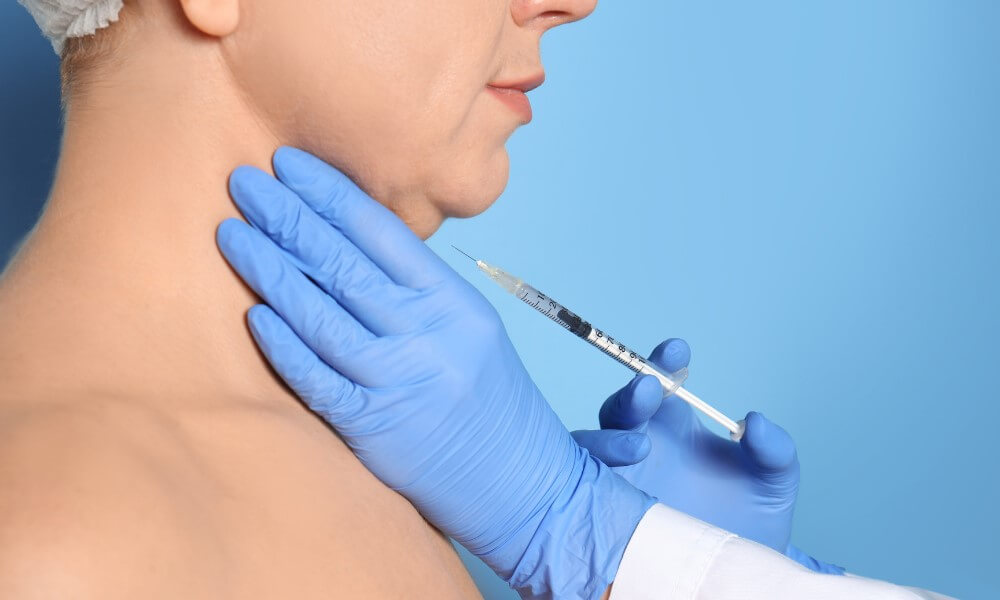 The cost of treatments that remove excess fat cells depends on many factors.

While the exact cost highly depends on your goals, the surgeon, and the facility you’re going to, here’s how much the procedures for double chin removal usually cost:

Because each patient’s neck lift is unique, there is no set fee for the operation. The average neck lift cost starts at £5,000, according to estimates. However, it varies widely depending on the patient’s goals and needs. The cost is also determined by the scope of the process.

Plastic surgeons charge for the surgery depending on their competence, the method of the procedure, and the location.

Facelift prices in the UK range from £10,000 to £20,000. Just like any procedure on this list, the exact cost can go up or down depending on your needs and goals.

High-end surgeons might also charge more. However, the procedures they perform are more reliable, safer, and more effective than those with less experience.

The cost is directly proportionate to the size of the area and the surrounding tissue treated during a single surgery. The cost in the UK indicated above only relates to liposuction. However, a combination surgery would undoubtedly cost more than liposuction alone.

Are you looking for one of the best plastic surgeons in London and the world? Visit my Harley Street clinic to see what I can do for you.

As an alternative, you can contact us to book a consultation. See you around!