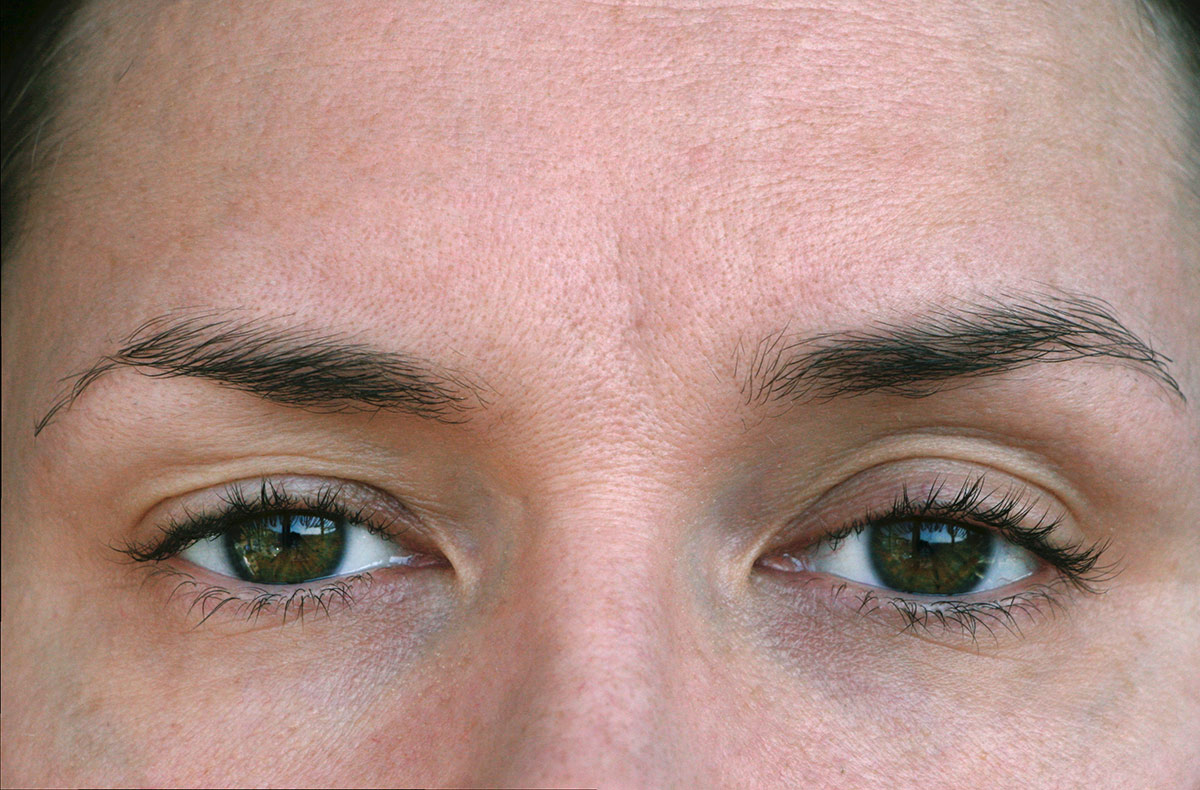 The overhanging skin of the upper eyelid is first marked with the patient either sitting up. The marking is key to the procedure and in some cases this can take 10-15 minutes to complete. Millimetres make a difference in the eyelid and meticulous care is required to ensure the markings are accurate on the right and left sides. In men the normal skin crease is usually between 6-8mm and in woman between 8-10mm, there is considerable individual variation in skin crease position between people. Dr De Silva uses your natural crease in the majority of patients unless there is marked natural asymmetry or the skin creases are inconsistent with a natural looking result as a high skin crease can look artificial in some facial shapes. When the eyelid has been marked, this shape leaves an ellipse in the upper eyelid. The surgeon’s technique and appreciation of fine eyelid anatomy is key to remove the correct amount of excess skin. Inadequate removal will result in a residual overhang of skin, removal of too much skin and soft tissue will result in troublesome dry eye. In addition bulging of the fat pockets in the upper eyelid should be marked as this indicates orbital fat that is prolapsing forwards which is addressed during upper blepharoplasty. 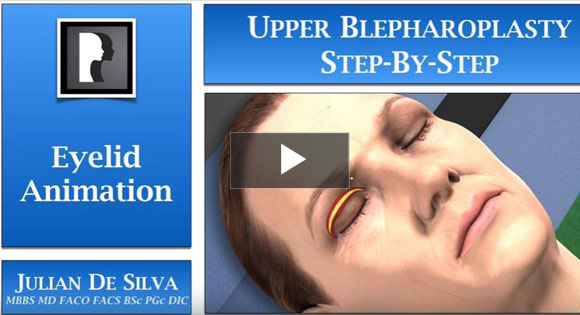 Upper Blepharoplasty – How is it done? An animation showing how upper eyelid surgery is completed.

The bottom edge of the upper eyelid ellipse follows the line of the natural eyelid crease and extends from the area just above the tear duct medially to the outer edge of the eyelid opening temporally, where it then arches up upwards and outwards into an existing natural crease.
The skin above the incision is gently pinched while the eyes are closed to determine the maximum amount of skin that can safely be removed without pulling up on the upper eyelid margin or down on the brow. The upper eyelid skin is removed using a fine scalpel blade, scissors and forceps. Dr De Silva uses specialised equipment including CO2 laser precision or electrocautery to aid removal of skin and to minimise bleeding. Reduced bleeding during the surgery results in less bruising and speeds up your recovery. 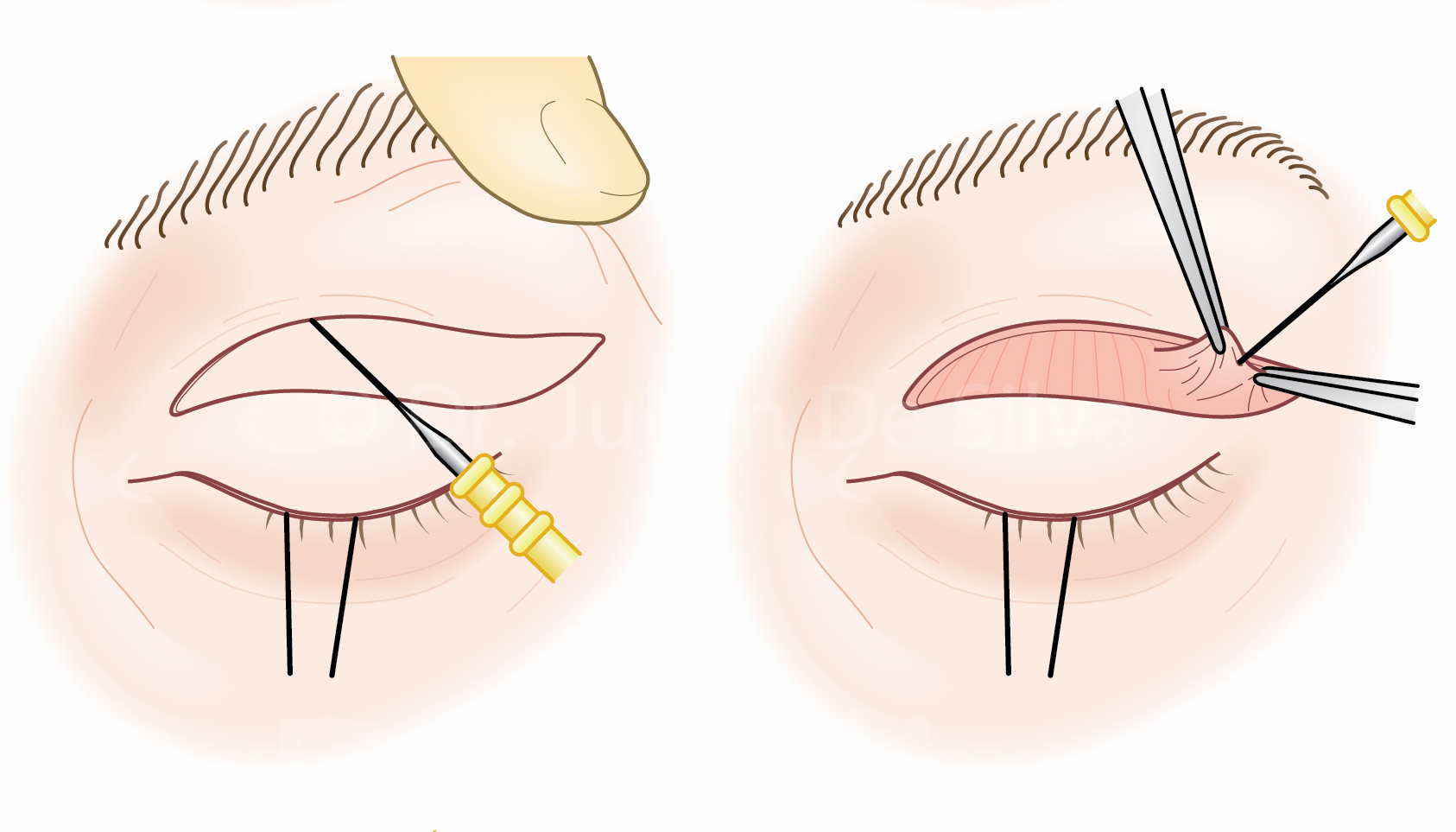 Underlying the eyelid skin is a ring of orbicularis muscle that surrounds the eye, this muscle provides an important part in blinking. With facial ageing the orbicularis muscle often acquires increased laxity. Dr De Silva removes 1-2mm strip of muscle in approximately two thirds of cases depending on the relative fullness of the upper eyelid and a person’s individual facial ageing. This decision to remove a strip of orbicularis muscle is depending on the amount of fullness of the upper eyelid, the laxity of the soft tissues and the opposite side. 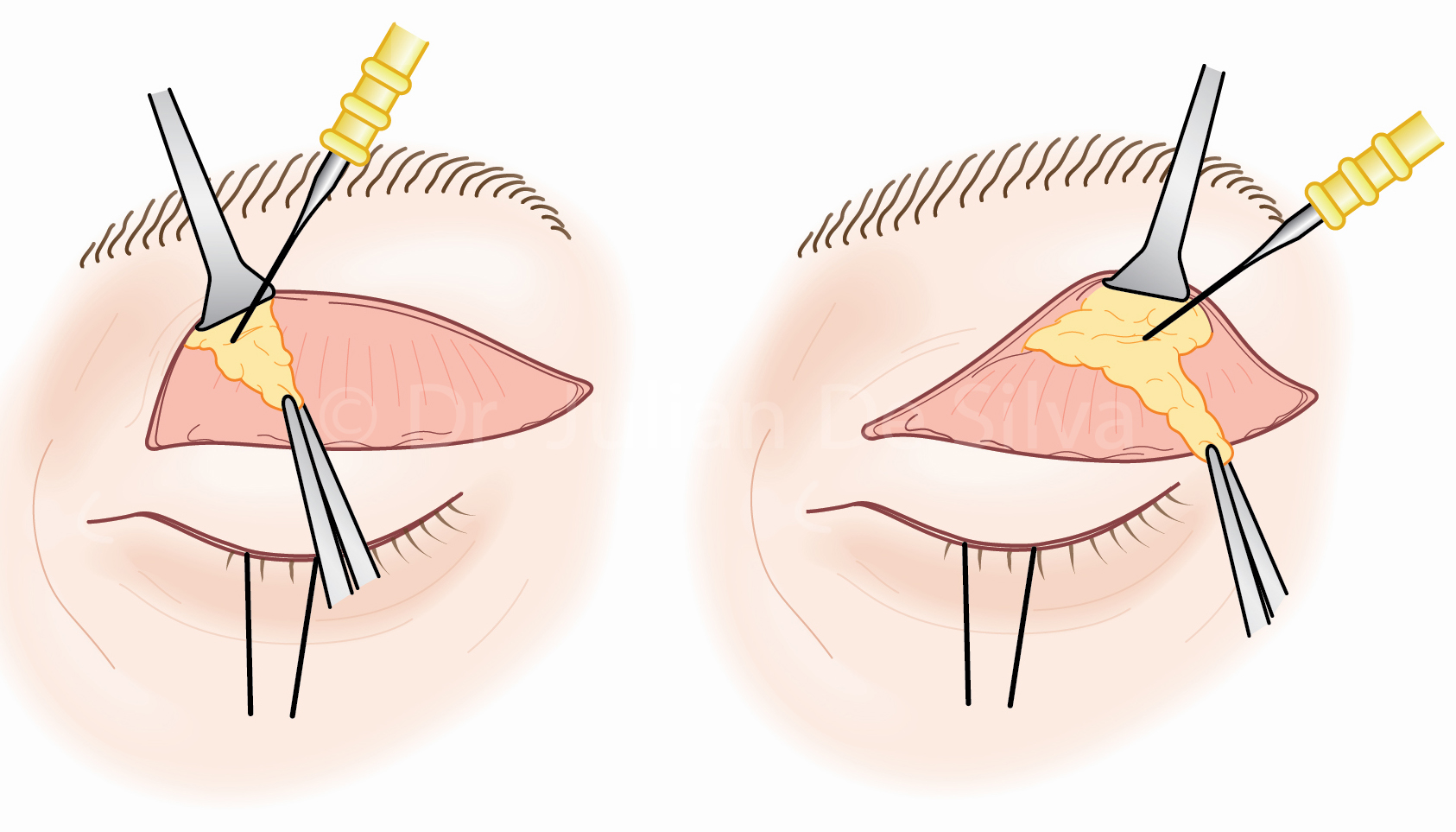 In the majority of people, there is a degree of bulging and fullness of the upper eyelids, this is a consequence of orbital fat pushing forwards through the eyelid. The eye sits in a cushion of orbital fat that line the bony orbital socket, this is important in insulating the eyelid for example with exercise to prevent the delicate eyeball coming into contact with the surrounding orbital bone. With time, thinning of the soft tissues often results in a bulging of the orbital fat forwards creating a bulge on the surface of the upper and lower eyelids. Although this may happen in a young adult as a consequence of genetics, it is usually attributed with a combination of factors including ageing, environmental factors that promote tissue aging such as smoking or some conditions such as thyroid eye disease.

If orbital fat is seen bulging, a structurally fibrous layer known as the orbital septum is opened. The fat is generally removed or shaped, although in some cases the fat is repositioned without excision.

Dr De Silva favours conservative removal and repositioning of fat as over-removal of fat can resulted in a “hollowed-out” appearance to the eyelid that is unappealing. Although it is always possible to remove more soft tissue including fat, it is much more challenging to correct once too much fat has been removed. Thirty percent of the patient’s Dr De Silva treats have had previous eyelid surgery, the eyelids are an intricate part of the face where millimetres make a considerable difference.

Dr De Silva uses specialised state of the art technology including a US-manufactured CO2 laser or monopolar electrocautery to establish meticulous control of bleeding, key to preventing both bruising and preserving good vision after surgery. 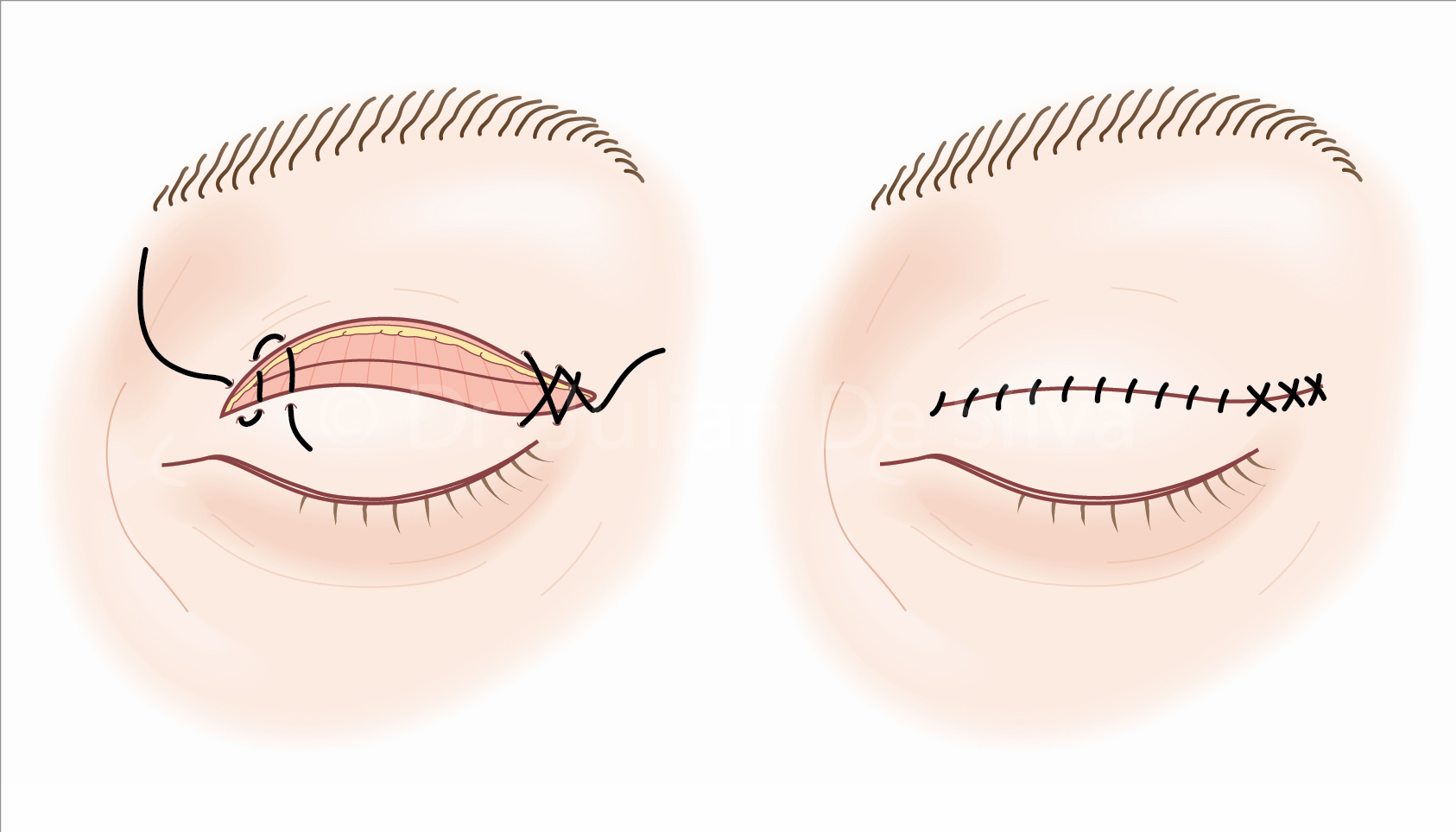 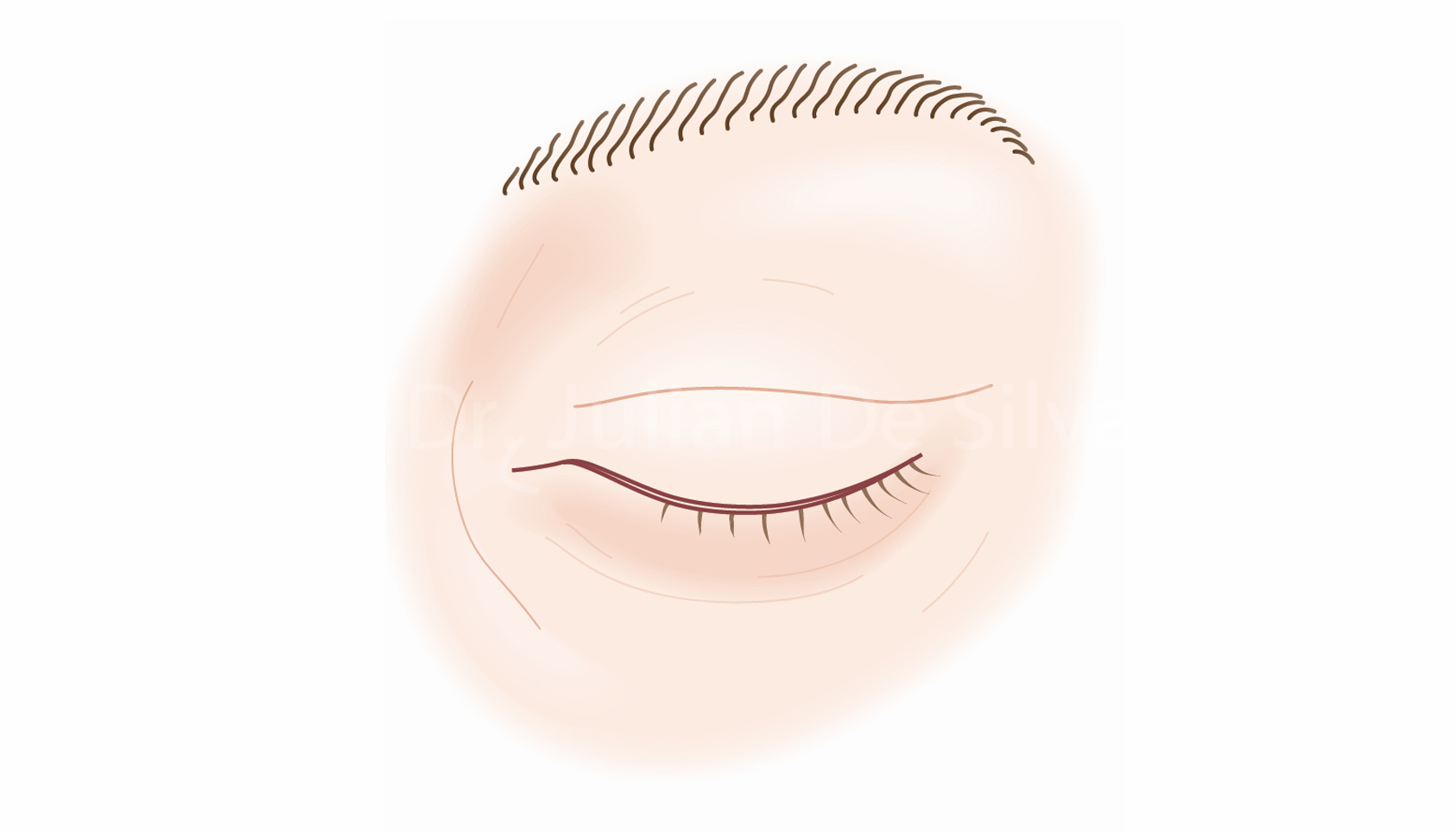 Dr De Silva also has pioneered the use of regenerative medicine with blepharoplasty. This surgical innovation is preferred by his patients, as it enables your natural growth factors to aid healing improve speed of recovery and reduce bruising.

Drooping of the upper eyelid, Ptosis

Drooping of the upper eyelid is a relatively common eyelid condition that usually occurs with aging of the facial tissues. In medical jargon this is called ptosis. Humans have an exquisite ability to recognize less than one millimetre asymmetry between the eyelid heights, and half a millimetre or more drooping of one eyelid can be noticeable. There is a small muscle behind the upper eyelid that opens the eyelid (the levator aponeurosis) and with facial aging or as consequence of genetics (inherited from your parents), the muscle can slip or is weak resulting a droopy eyelid. Ptosis repair can be repaired in two main ways: