In closed rhinoplasty the incisions are placed in the inside of the nose, where they are hidden. In open rhinoplasty a small incision is place under the nose near the nostrils, this becomes hidden with time. The underlying soft tissues, cartilages and bone are sculpted, shaped and stitched to create the nose’s new shape. An implant may be used to enhance the bridge of the nose, increase tip definition or prevent collapse by adding support. The skin is re-draped over the nose’s new frame and all incisions are closed with stitches. A splint or case is placed over the nasal bridge to hold support of the nose while the tissues heal and is removed after 1-week. All patients are seen at 1-week after surgery, 90% of the swelling resolves over the first week, small residual swelling can persist for several weeks and the final refinement can take several months to a full year to settle. Anti-inflammatory treatments can be used to reduced swelling and enhance the final result.

The nose has a central position in the face and is key to both facial balance and harmony. A nose that is out of balance to the face with a nasal hump or large undefined nasal tip or just too large or too small can become the focus attention on a person’s face and detract away from their other attractive facial features such as the eyes. Rhinoplasty surgery is nose-reshaping that involves sculpting and refinement of the nasal cartilages, soft tissues and bone to give better facial balance. 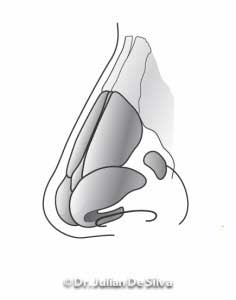 The above image is taken from Dr. Julian De Silva’s forthcoming book on Facial Cosmetic & Plastic Surgery, this figure shows the anatomy of the nose. Only the top third of the nose is made of bone, the majority of the nose is made up of 5 main cartilages. The shape and size of these cartilages and other anatomical soft tissues can vary considerable with factors including ethnicity, genetics and gender. Shaping of the nasal cartilages and bone is the process by which rhinoplasty is used to re-shape the nose.

Nasal Hump Reduction reduces the size of a nasal hump on the bridge of the nose to make a nose both straighter and smoother. Following reduction of your nasal hump, the bones of the nose require narrowing to provide the nose an improved shape and avoid a flattened nasal bridge.

Nasal Tip Refinement reduces a large box shape or irregular nasal tip, sometimes referred to as bulbous tip, the nasal tip cartilages are refined and sculpted to give an improved shape and definition. The definition of the nasal tip is affected by the ethnicity of your nose and skin thickness at the nasal tip.

The correction of a Droopy Nasal Tip involves lifting the tip of the nose, this is often combined with nasal tip refinement to improve the definition of the nasal tip. The optimal position of the nasal tip is specific to an individual and based upon individual characteristics such as height, ethnicity and gender. After surgery Dr. De Silva expects you nasal tip to be 1-2mm higher than its final position, and over a period of months after surgery the tip will come to rest at its final position.

Nasal Augmentation creates a more prominent and smooth nasal bridge to give a stronger, more even and proportioned nose, often this is in patients who have a small nose or have had a scooped bridge to the nose sometimes called a ski-slope.

Nasal Width Reduction reduces the width of the nose in relation to your face. A wide nose results from a combination of genetics and ethnic characteristics. Dr. De Silva hides the incisions on the inside of the nose and has a highly conservative approach to preserve functional breathing. Narrowing of your nose during rhinoplasty improves the appearance of the nose by improving its proportion to your face.

Ethnic Rhinoplasty refers to surgery that is tailored towards improving nasal shape and refinement with consideration to a patient’s genetics and ethnicity. The nose is made up of skin, cartilages, soft tissues and bone, all of which have different characteristics based upon your ethnicity. Rhinoplasty requires consideration both your individual facial characteristics and ethnicity to give a result that is harmonious to your face.

Septal Deviation refers to the central cartilage in the nose (this wall of cartilage tissue separates the right and left nostrils). A septal deviation often causes a crooked nose and may cause difficulty in breathing because of blockage of the airway. Dr. De Silva corrects a septal deviation with septoplasty in 30% of cosmetic rhinoplasties to improve the breathing of the nose. 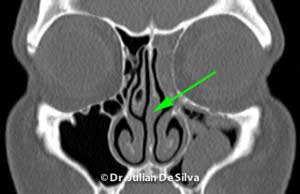 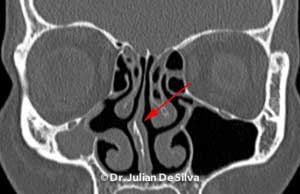 The CT imaging above illustrates septal deviation. In the above figure, the green arrow shows a straight septum, this allows equal air flow in the right and left sides of the nose and normal breathing. The below figure with the red arrow shows a deviated septum, this results in reduced flow to the side of the deviation by narrowing the air flow. Septal deviation can vary substantially in severity, a severe deviation can cause near complete obstruction of the airway. With rhinoplasty, Dr. De Silva places importance in the correction of a septal deviation with septoplasty to ensure good breathing after rhinoplasty. Dr. Julian De Silva will commonly include septoplasty with rhinoplasty surgery to give the patient the best possible cosmetic result as well as maintaining functional breathing. In some patients additional grafts are required to support the breathing particularly when the nose is being reduced in size.

Most rhinoplasty surgery requires a number of modifications of different aspects of your nose to give a well proportioned and attractive result. For example, although the nasal tip of a patient may be large and predominantly bulbous, once the tip is sculpted and refined, other parts of the nose including the bridge of the nose, the width of the nose all need adjustment to give a shaped and proportioned result.

For more information on Rhinplasty, click on the following links: