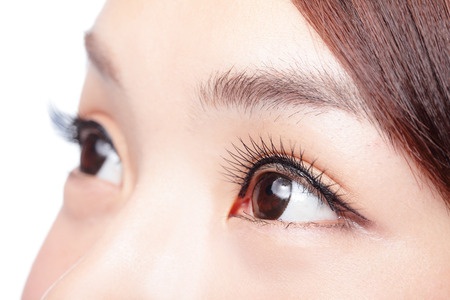 This patient underwent Asian Blepharoplasty under Sedation/ Twilight Anaesthesia with Dr Julian De Silva, this is her personal account and experience.

I had disliked my upper eyelids ever since my teens, and had always been conscious of the expression they gave to my face. My lids were quite hooded and had a look of puffiness, and even though I did have half a natural crease, this was hidden by the heaviness of my eyelids. The hoodedness made my eyes look small. I had wanted to have Asian blepharoplasty for many years to make my eyes look more open but, being quite nervous of surgery, hadn’t ever plucked the courage to go through with it. It wasn’t until around a year ago, when I started looking into it again, that I realised that techniques had moved on since my teens and recovery was easier.

I knew that finding the right surgeon for me would be integral to my final decision, so I made a long list. I googled ‘best London cosmetic surgeon’ and received a list of names, shorter than I had actually expected, and researched each one. I focused on past patients’ reviews, as I wanted to cut through the marketing, understand the surgeon’s surgical methods and approach to patients, and get a sense of his success rate. I found a website that shows patient reviews, googled for more reviews for each surgeon, and also looked at their facilities and location. Throughout my research, Dr De Silva came out as a front runner, with excellent reviews. I read through his website several times and was struck by the level of detail and by his combined emphasis on the aesthetic and on modern techniques – both very important. I had consulted one other surgeon previously and hadn’t been as impressed by the level of information or reassurance given. So I made my first appointment with Dr De Silva.

I went armed with dozens of questions and quizzed Dr De Silva on many fine details about the surgery, recovery period and expected results. I received all the information I needed and by the end of the consultation, felt confident enough to seriously consider surgery. After mulling it over for a couple more weeks, I decided to book.

My surgery was scheduled for around 8 weeks after my first consultation, and I was booked in for a pre-surgery appointment around 2 weeks before. There, we went over the procedure again and the kind of results I was looking for. I tried to be as specific as possible about how I wanted to look, though also understanding that the exact results can’t be guaranteed. It helped to show Dr De Silva photos of someone whose eyelids I liked, and I was quite specific about how much higher I hoped my eyelid crease would be. At the consultation also I received my prescription for medications, which included antibiotics, anti-swelling medicines, antibiotic ointment, Vitamin C, arnica and painkillers. I made myself a timetable for the 8-9 days around surgery so that I would know day-to-day exactly what I needed to take and when, as the prescriptions varied quite significantly. A few meds, like antibiotics, need to be started a day or so before the actual procedure.

Pre-surgery, I also prepared small bags of frozen peas to reduce swelling, gathered as many pillows as possible (because I had to sleep upright and propped up on them, post-surgery), and generally prepared to be homebound for 7-10 days after surgery.

The night before I was both very nervous and somewhat in denial! I aimed to get a good night’s sleep, and was careful not to eat or drink past the permitted time. I had opted to have twilight sedation in my surgery, so I had a few rules to observe.

In the morning, I took an antibiotic pill with a sip of water, but had nothing else. On arrival, I was led to the surgical facilities downstairs, where Dr De Silva first ran through a few procedural matters. I was given a fetching blue gown, slippers and cap to wear, and had to remove all metal (jewelry, underwired bra etc.). I then met the anaesthetist, who talked me through what I could expect with the sedation, then gave me an IV paracetamol drip because the sedation drugs might otherwise smart when introduced. The anaesthetist explained that I would be in a state of half-sleeping, half-wakefulness but would probably not remember much or anything of the procedure. I might drop in and out of a light sleep, and could signal to the anaesthetist if I was feeling too awake at any time. Throughout, I would be on painkillers, so even if I felt more awake than I wanted, I would not be able to feel anything. Although everyone reacts differently to sedation, I joked that my ideal would be to be knocked out completely and not remember a thing!

Last before surgery, Dr De Silva came in to markup my eyelids. He spent a fair amount of time measuring the right proportions and getting the lines right.

Mark up done, I went into the theatre, lay on the table with my head propped in a soft disc, and had a metal patch attached to the cauterizing equipment stuck on to my leg (this is to earth the system). The anaesthetist fed the sedation medications into my drip, and no sooner had I commented on being able to feel them flow lightly up my arm, did I switch off spontaneously! I was out like a light and only came to when the surgery was over and I had a bag of ice over my eyes. I didn’t remember anything of the surgery (and still don’t now), and felt comfortable and reasonably alert when I woke up.

A friend was waiting to take me home, and though I felt a little woozy, I was pretty much fine. I took my medications as prescribed for the rest of the day, slept a little and took it easy. I had mostly no pain, apart from needing to take a painkiller in the evening for a little discomfort. I had a line of stitches in each eyelid but no dressing. There were two types of stitches – one permanent and the other dissolvable. They were not visible apart from the small knots in places.

The first week, I stayed at home and didn’t venture out. I spent the days taking my meds, applying antibiotic ointment on the wounds, and applying the frozen pea bags to my eyelids every 15 mins. I took it easy but was able to do everything for myself. My main focus was to follow Dr De Silva’s instructions to the letter! My eyelids were quite swollen but the wound was already obviously within the crease, so I was confident that, when the swelling went down, the scar lines would not be visible. I had no pain throughout my recovery and no bleeding or seepage. I had a little discolouration at the corner of my right eye and above my let, but apart from that, virtually no bruising.

I took care to remain upright at all times, so slept propped up on pillows. The swelling went down quite rapidly between the 4th and 7th days, and the wound began to settle into the crease.

At day 7, I had my permanent stitches taken out, which I was so glad for as they had been feeling tight for a day or two. My eyelids had healed so well that apparently the skin had healed over the stitches in a couple of places, but the stitches were not difficult to take out. There were a few twinges and sharp pulls but the stitches came out easily. The dissolvable ones were left in.

I went back to work on day 9, and by then the swelling was coming under control. My eyes looked a little puffy as if I had just woken up, but I don’t think anyone really noticed. I used eye drops regularly as my eyes were a little dry, but otherwise all was as good as normal. I made the decision not to cover up the scar with concealer, as I didn’t feel comfortable with applying chemicals over healing skin, and to be honest, the scar has formed into my crease so well now that I don’t think anyone can see it unless I close my eyes.

Well, now I am at week 4, and very happy! The swelling has almost all gone down, the skin has healed well, and I no longer need eye drops. Though I still have a red line across my eyelid, I’m fine with that. My dissolvable stitches disappeared just after 2 weeks. I have no real lingering effects of the surgery, apart from my lids feeling numb where the fat has been taken out. The results of the surgery look very natural and my eyes are more open, to a subtle, conservative degree but just enough to change the overall expression of my face. I look forward to further scar healing, when the line turns lighter, and I am already beginning to lightly use eyeshadow on my lids. Overall, I am very pleased with my results, and so happy that I took the plunge! This has been well worth it!