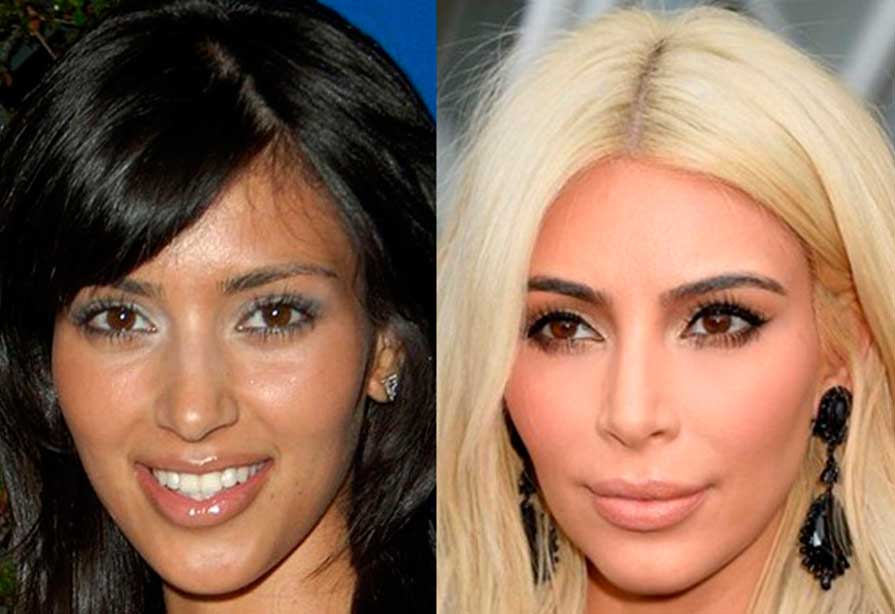 Kim Kardashian continues to have phenomenal success as a television and social media personality, actress and model. With her career almost unperturbed by the plastic surgery speculations that have followeed her life for a long time. There is no doubt that she is a distinguished celebrity who knows her way around fame and fortune. The shape of Kim Kardashian’s nose continues to fuel speculations of rhinoplasty. The world first noticed Kim Kardashian as a friend of Paris Hilton until she became a celebrity in her own right. She was talented and showed some great promise of stardom. She did not disappoint, Kim Kardashian has a sunshine smile that shone through the full extent of her beauty. In the eyes of many beauty analysts, her beauty has only been enhanced with age and with the alleged help of a few nip and tucks. Some critics in the celebrity world argue that the quest for perfection has always pushed many female celebrities into the hands of plastic surgeons. Bloggers, experts, some fans and surgeons have held up Kim Kardashian’s photos to show evidence of a nose-job well done, and it is hard to verify the authenticity of such claims. According to them, a closer inspection of the before surgery photos would reveal that her nose was more droopy and less defined in her youth. Relatively few celebrities are willingly to openly discuss what procedures they have undergone. Kim Kardashian’s current appearance shows an attractive and well-balanced nose that are suggestive of grace and glamor. Many celebrity analysts agree that she is in a class of her own. From Dr. De Silva’s experience many well known celebrities have undergone a relatively modest improvement which he terms “Rhinoplasty Refinement”. This is for all round improvement of a person’s nose while maintaining their natural facial characteristics. A more attractive nose may mean a narrower more refined tip which is not droopy. Most celebrities are not looking to look different, they are just looking to give themselves an edge, a small improvement in the elegance and balance of their face.

Some celebrities see the risk involved in plastic surgery and its underlying nature a good reason to avoid surgery altogether, however many embrace surgery for a refinement of their natural beauty, says Dr. Julian De Silva. Most celebrities have already been dealt a great genetics card with natural beauty and a nose job may be a way of taking that just a little further.

For more information on Rhinoplasty, click on the following links: