Blepharoplasty is the second most common cosmetic surgery in men. While in principle the cosmetic procedure is similar in men and women, there are distinct differences in the male and female upper eyelids that correspond to the underlying facial structure and anatomy. An attractive and youthful appearance in a man is different to a female. In men, prominent low brows and subtle eyelid show are both attractive and youthful. In women, high brows, increased lid show and high crease in the skin is beautiful. Male blepharoplasty is more challenging than female blepharoplasty as the techniques required to give a natural looking result are a combination of specialized technique and artistic judgment.

The other consideration in male blepharoplasty is the position of the brow. A low brow is an attractive feature in male appearance. Surgery that elevates the male brow should be conservative, as lifting the brow can result in feminisation of the male face. A cosmetic surgeon who specializes in the face is able to avoid such an appearance.

Dr. De Silva uses a combination of techniques and innovations in male blepharoplasty. In some cases he will use a combination of surgery with 3D telescopic surgery and the use of a muscle relaxant to give the best result. 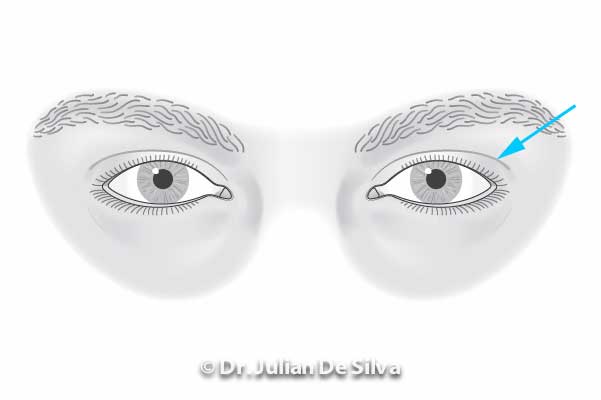 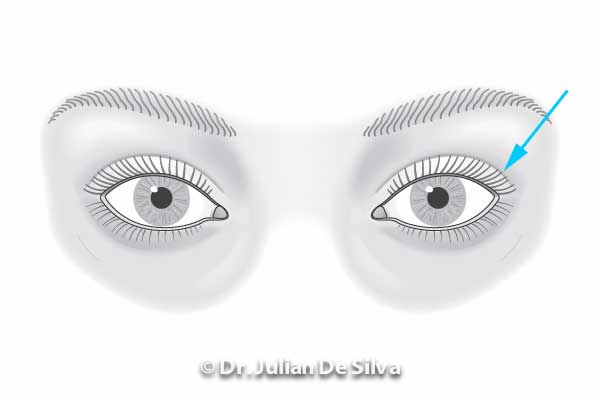 The above figures are taken from Dr. Julian De Silva’s forthcoming book on Facial Cosmetic & Plastic Surgery, the top figure shows the appearance of the male brow and eyelids. Men characteristically have lower eyebrows with a fuller upper eyelid and low skin crease (marked with a blue arrow). In comparison women characteristically have a higher brow with more open eyes and a higher skin crease. Dr. De Silva refined surgical techniques ensure that after surgery the eyelid and brow have a natural appearance. The techniques for natural looking male blepharoplasty are more refined that in womans’ as it important to avoid feminisation of male appearance.

A natural looking rejuvenated male blepharoplasty requires different surgical techniques to that of female blepharoplasty. The position of that the natural skin crease of the eyelid should be lower. In addition the surgery required should be more conservative as having a fuller appearance to the upper eyelid and brow area, is both masculine and an attractive physical feature. The excessive removal of soft tissues including the orbicularis muscle (the ring muscle that surrounds the eye) and the underlying fat, will increase the openness of the eyelid, however, this will have a tendency to feminise the appearance of the face by opening up the eyes. This is one of the reasons some celebrities such as singer-songwriter Kenny Rogers has an unnatural appearance to his eyelids after undergoing blepharoplasty. A natural looking rejuvenated appearance of the eyelids in men requires conservative surgery with a small amount of lid show and fullness in the area immediately above the eyelid to the brow. This is the principal reason that good facial cosmetic surgery looks natural. Dr. De Silva is an advocate for conservative surgery and less is more philosophy in male blepharoplasty, this results in natural looking rejuvenation.
Before
After

In this woman there is relatively large amount of upper eyelid show with reduced fullness in the upper eyelids and brow area following upper eyelid blepharoplasty. The result is a rejuvenated appearance that brings out the green attractive appearance of this woman’s eyes.

In this man there is relatively small amount of upper eyelid show with fullness in the upper eyelids and brow area following eyelid surgery. The result is a rejuvenated appearance that remains masculine and natural looking.